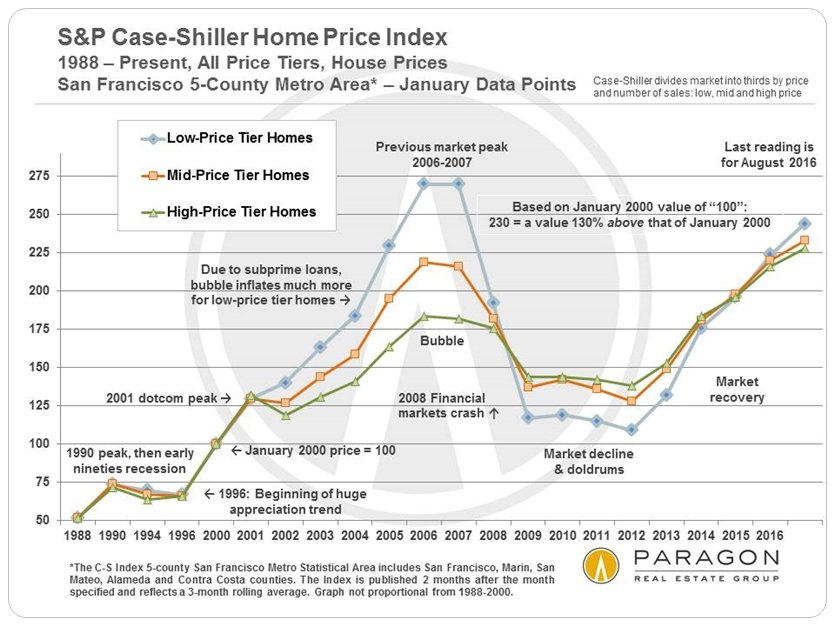 IMPORTANT: Since Case-Shiller Indices cover broad areas – 5 counties in the SF Metro Area – which themselves contain communities and neighborhoods of widely varying home prices, the C-S chart numbers do not refer to specific prices, but instead reflect home prices as compared to those prevailing in January 2000, which have been designated as having a value of 100. Thus these charts are really generalizations about appreciation (or depreciation) trends: for example, a reading of 228 signifies that home prices have appreciated 128% above the price of January 2000. For data on actual median home prices for specific locations, please access our Market Reports page, or for San Francisco, our Neighborhood Values page, by clicking on the links in the upper left hand corner. Alternatively, at the very bottom of this report, there are a few charts on overall median home prices in SF, Marin and Lamorinda/Diablo Valley.

Long-Term Appreciation Rates by Price Segment
Case-Shiller divides all the house sales in the SF metro area into thirds, or tiers. Thus the third of sales with the lowest prices is the low-price tier; the third of sales with the highest sales prices is the high-price tier; and so on. (The price ranges of these tiers changes as the market changes.) As seen in this first chart, the 3 tiers experienced dramatically different bubbles, crashes and recoveries over the past 12 years, though the trend lines converged again in 2014 – this is discussed in detail later in this report.

Short-Term Appreciation Rates by Price Segment
In recent months, prices for more affordable houses has continued to appreciate rapidly,
while condo prices have dropped a little, and high-priced homes have basically plateaued. 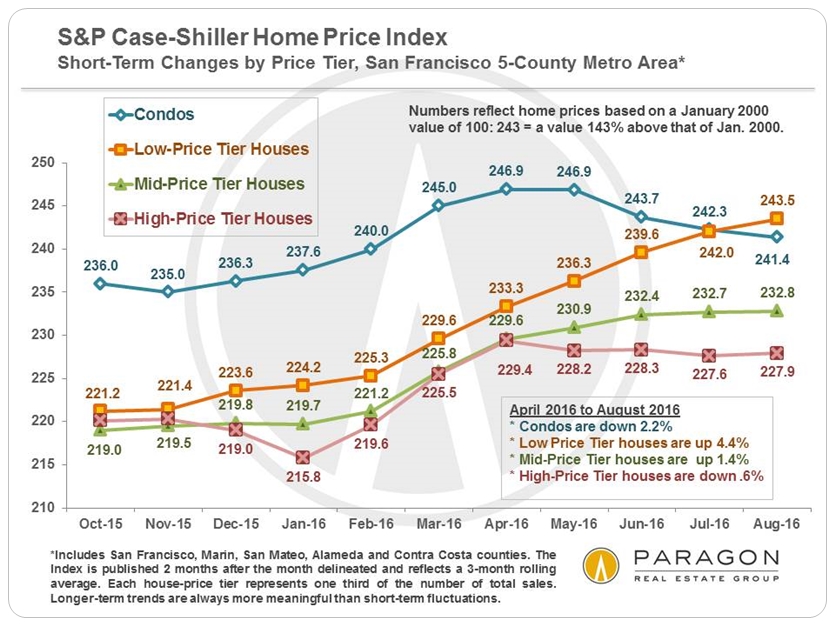 Longer-term trends are always much more meaningful than short-term fluctuations.

The S&P Case-Shiller Index for the San Francisco Metro Area covers the house markets of 5 Bay Area counties, divided into 3 price tiers, each constituting one third of unit sales. Most of San Francisco’s, Marin’s and Central Contra Costa’s house sales are in the “high price tier”, so that is where we focus most of our attention.” We’ve also included some data on the Case-Shiller Index for metro area condo values, but unless otherwise specified, the charts pertain to house prices only. The Index is published 2 months after the month in question and reflects a 3-month rolling average, so it will always reflect the market of some months ago. The August Index was published on October 25.

The 5 counties in our Case-Shiller Metro Statistical Area are San Francisco, Marin, San Mateo, Alameda and Contra Costa. (And we believe the Index generally applies to the other Bay Area counties as well.) There are many different real estate markets found in such a broad region, moving at different speeds, sometimes moving in different directions. San Francisco’s single family dwelling (SFD) sales, which are what Case-Shiller measures, are only 7% to 8% of the total SFD sales in the 5-county metro area, while Alameda and Contra Costa make up over 70% of SFD sales.Therefore, the Index is always weighted much more to what is going on in those East Bay markets than in the city itself. (Marin’s percentage is about 7% and San Mateo’s about 14%.) SF makes up a larger proportion of condo sales in the metro area.

These first 2 charts below illustrate the price recovery of the Bay Area high-price-tierhome market over the past year and since 2012 began, when the market recovery really started in earnest. In 2012 – 2015, home prices dramatically surged in the spring (often then plateauing or even ticking down a little in the following seasons). The surges in prices that have occurred in the spring selling seasons reflect frenzied markets of high buyer demand, low interest rates and extremely low inventory. In San Francisco itself, it was further exacerbated by a rapidly expanding population and the high-tech-fueled explosion of new, highly-paid employment and new wealth creation. The markets in the Bay Area are starting to go at somewhat different speeds, depending on the price segment: the high-price tier has declined very slightly over the past 4 months, while the low-price and mid-price tiers have continued to appreciate. As clearly seen in the second chart above, the low-price tier has been seeing the most dramatic movement. In San Francisco itself, dominated by high-price tier homes, the market has been cooling and plateauing, though there too, its more affordable house market is clearly outperforming the market for more expensive homes (and in some neighborhoods, such as the Sunset, it remains fiercely competitive).

For more regarding how seasonality affects real estate: Seasonality & the Real Estate Market .

Short-Term Trend: Past 12 Months
Note that short-term fluctuations are much less meaningful than longer-term trends. 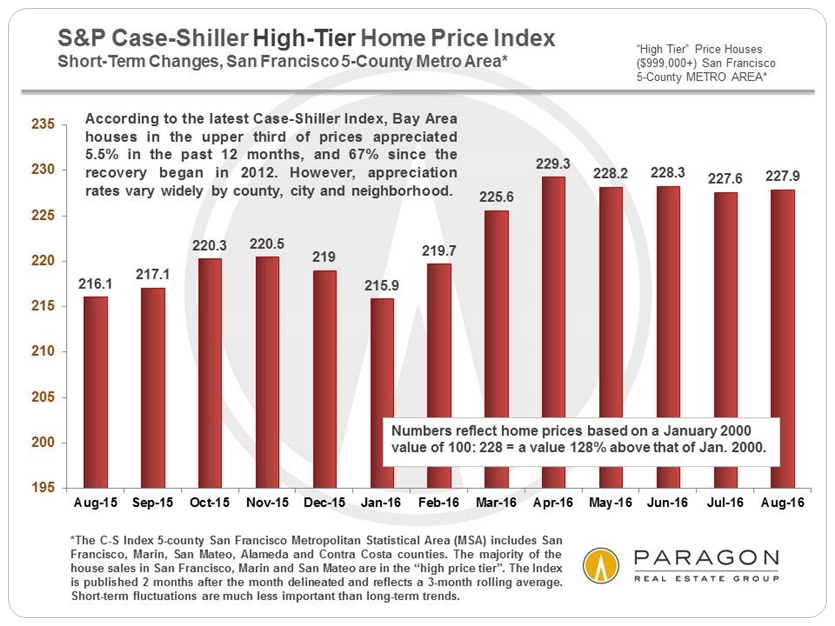 This chart below highlights the highly seasonal nature of home price appreciation over the past 5 years. 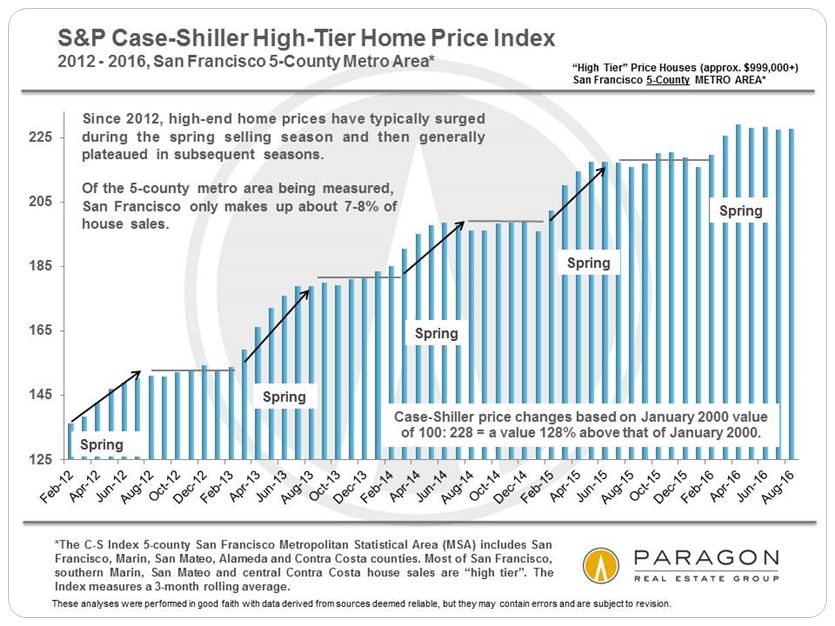 Longer-Term Trends & Cycles
The charts below reflect what has occurred in the longer term (for the high-price tier that applies best to San Francisco, Marin, San Mateo and the most affluent portions of other counties), showing the cycle of recession, recovery, bubble, decline/recession since 1988. Note that, past cycle changes will always look smaller than more recent cycles because the prices are so much higher now; if the chart reflected only percentage changes between points, the difference in the scale of cycles would not look so dramatic (as seen in the third chart below). 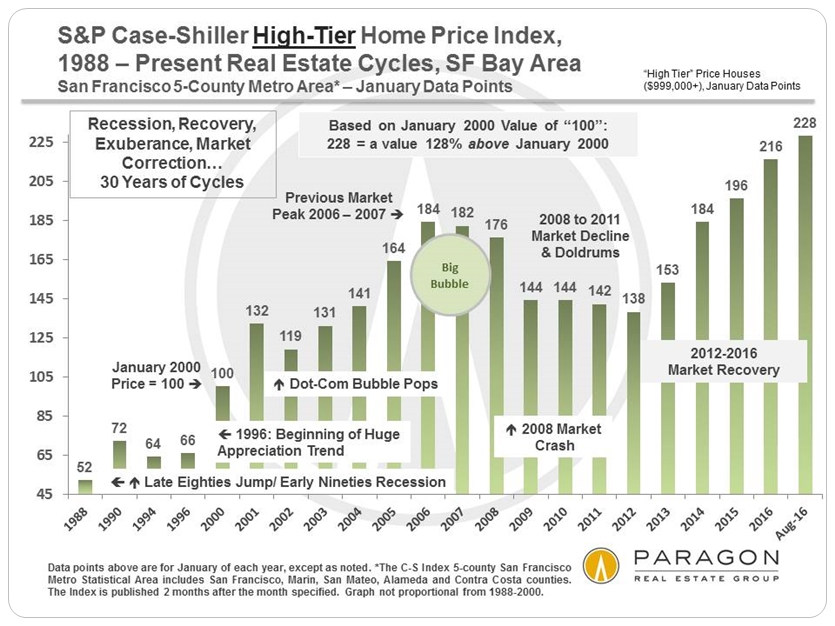 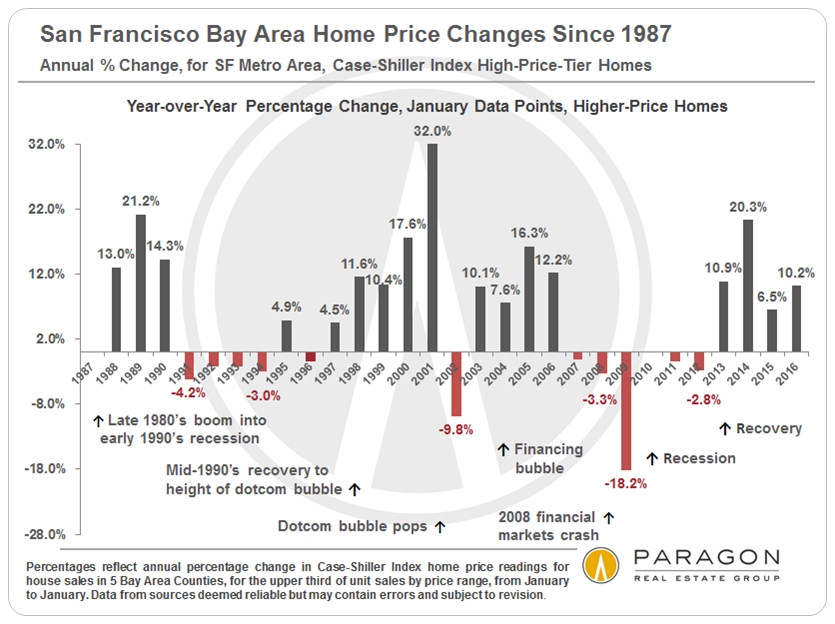 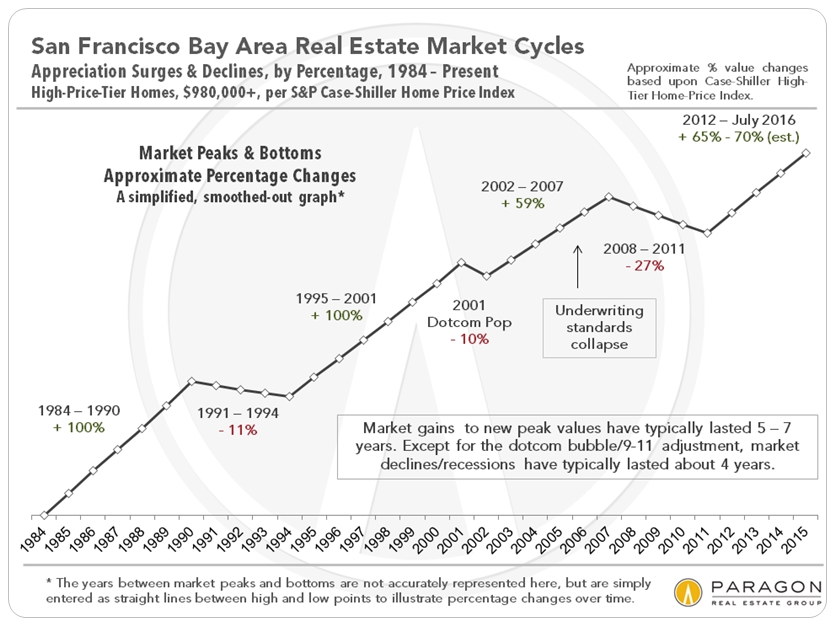 Different Bubbles, Crashes & Recoveries
This next 3 charts compare the 3 different price tiers since 1988. The low-price-tier’s bubble was much more inflated, fantastically inflated, by the subprime lending fiasco – an absurd 170% appreciation over 6 years – which led to a much greater crash (foreclosure/distressed property crisis) than the other two price tiers. All 3 tiers have been undergoing dramatic recoveries. The mid-price-tier is just now back to its previous peak values, but the low-price-tier is still below its artificially inflated peak value of 2006 (though recently, it has been appreciating quickly). It may be a while before the low-price-tier of houses regains its previous peak. The high-price-tier, with a much smaller bubble, and little affected by distressed property sales, has now significantly exceeded its previous peak values of 2007. Most neighborhoods in the city of San Francisco itself have now surpassed previous peak values by very substantial, and sometimes astonishing margins.

Different counties, cities and neighborhoods in the Bay Area are dominated by different price tiers though, generally speaking, you will find all 3 tiers represented in different degrees in each county. Bay Area counties such as Alameda, Contra Costa, Napa, Sonoma and Solano have large percentages of their markets dominated by low-price tier homes (though, again, all tiers are represented to greater or lesser degrees). San Francisco, Marin, Central Contra Costa, San Mateo and Santa Clara counties are generally mid and high-price tier markets, and sometimes very high priced indeed. Generally speaking, the higher the price, the smaller the bubble and crash, and the greater the recovery as compared to previous peak values.

Remember that if a price drops by 50%, then it must go up by 100% to make up the loss: loss percentages and gain percentages are not created equal. 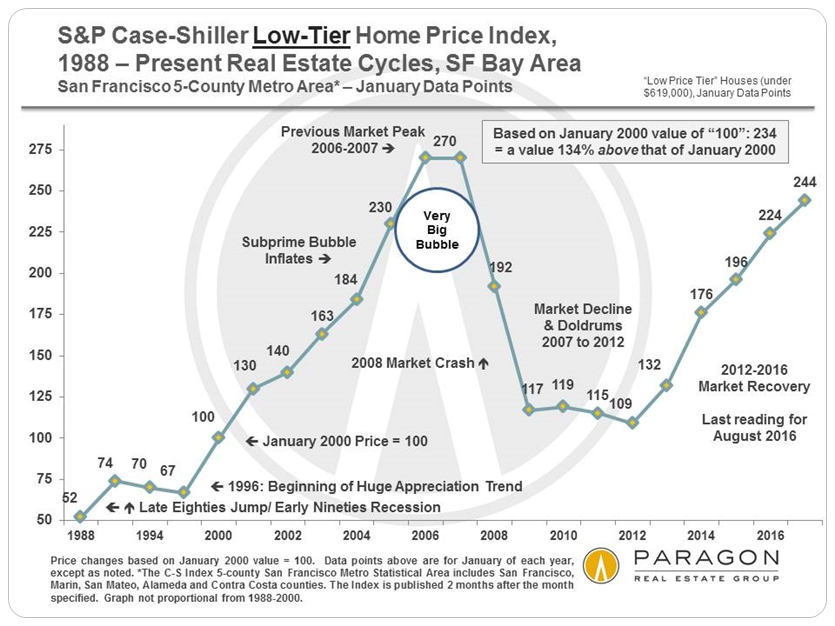 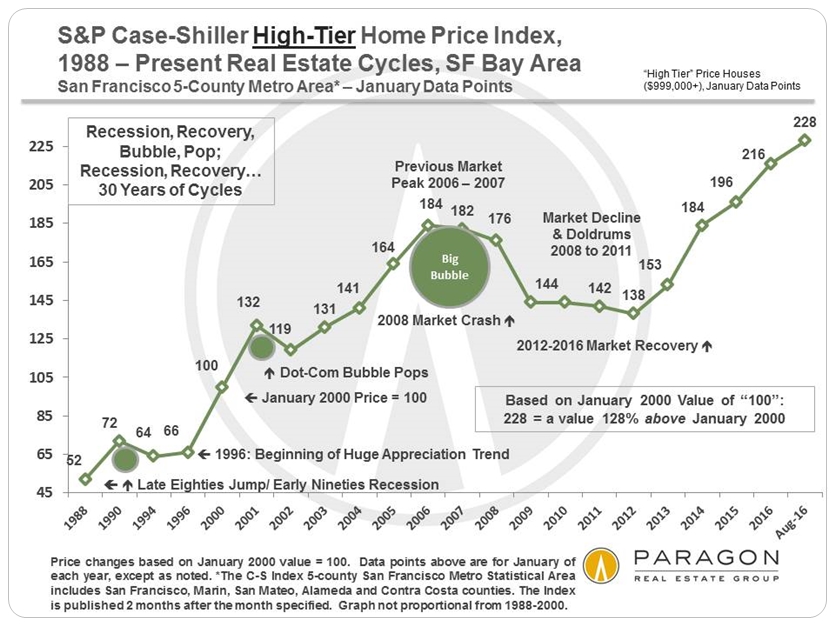 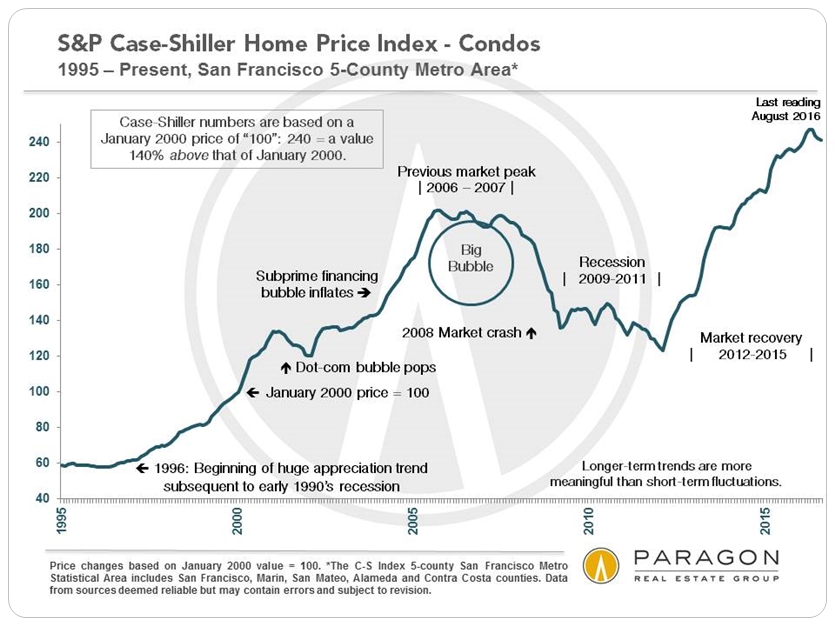 The more affluent neighborhoods led the city and the Bay Area out of recession in 2012, surging quickly, while the lower priced tier, still trying to recover from the huge distressed property/foreclosure crisis, lagged well behind. That dynamic shifted: the low-price tier caught up in 2014, and lately, as affordability has become an ever more pressing concern, it has become the greatest focus of buyer demand and has been appreciating significantly more quickly than than more expensive home segments. (Even though many of the more affordable houses in San Francisco, Marin, San Mateo and Lamorinda/Diablo Valley would actually qualify as high-price tier houses by overall Bay Area standards, the underlying dynamics are similar to Bay Area low-price tier homes, i.e. each market area’s dynamics reflect its own division into most affordable (low), mid-price, and more expensive (high) home segments). 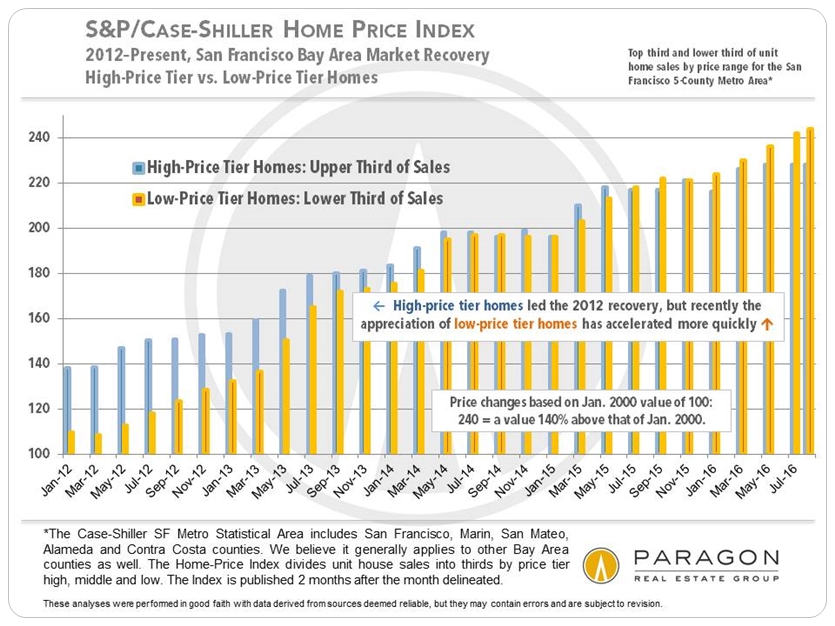 San Francisco, Marin and Central Contra Costa
Median Sales Price Trends
Looking just at the city of San Francisco itself, which has, generally speaking, among the highest home prices in the 5-county metro area (and the country): many of its neighborhoods are now blowing past previous peak values. Note that this chart has more recent price appreciation data than available in the Case-Shiller Indices. This chart shows both house and condo values, while the C-S charts used above are for house sales only. Median prices are affected by other factors besides changes in values, including seasonality, new construction projects hitting the market, inventory available to purchase, and significant changes in the distressed and luxury home segments. 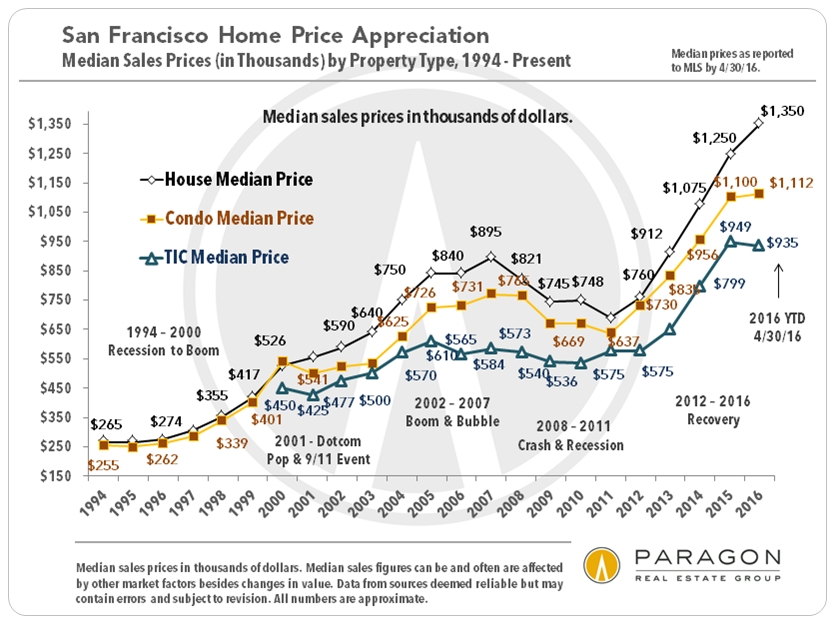 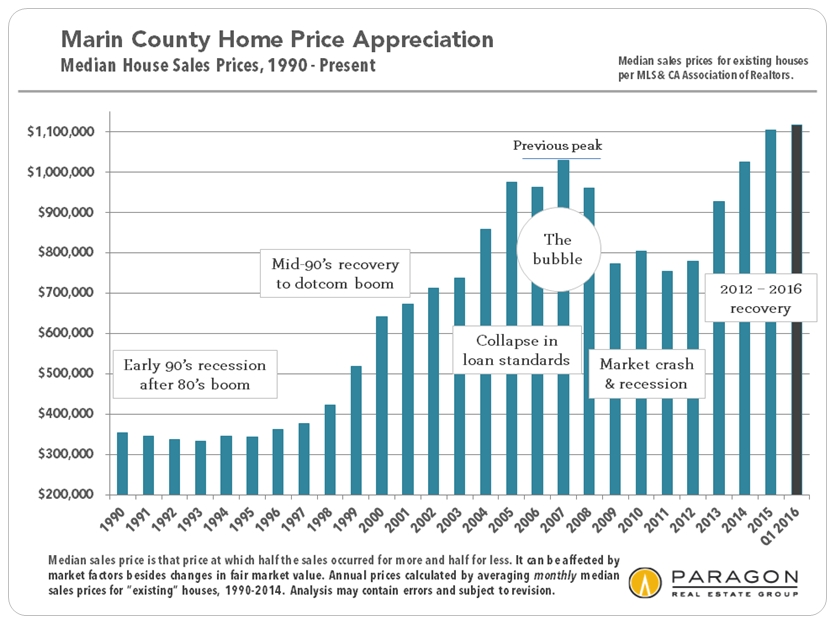 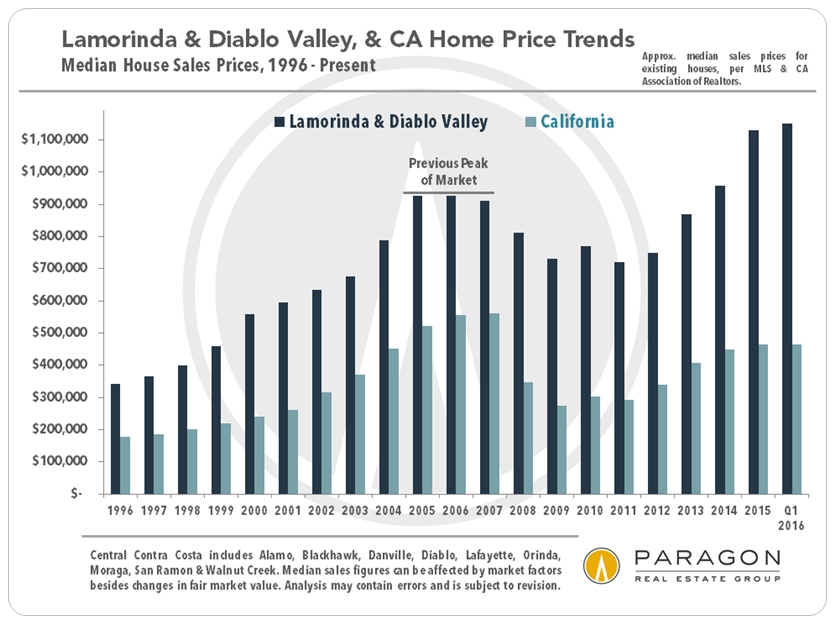 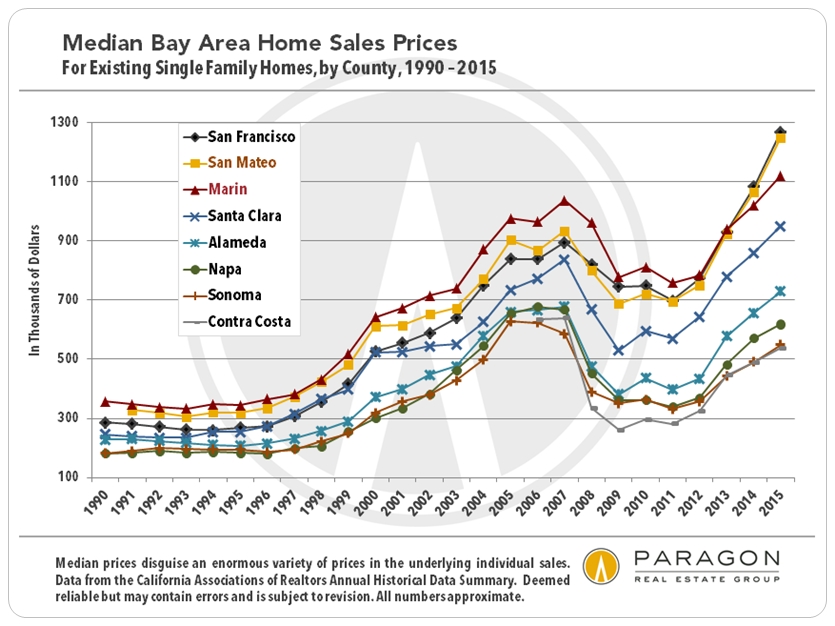 And this chart for the Noe and Eureka Valleys neighborhoods of San Francisco shows the explosive recovery seen in many of the city’s neighborhoods, pushing home values far above those of 2007. Noe and Eureka Valleys became particularly prized by the high-tech buyer segment and the effect on prices was astonishing for the first 4 years of the recovery, but in 2016 it started to see small declines in values. 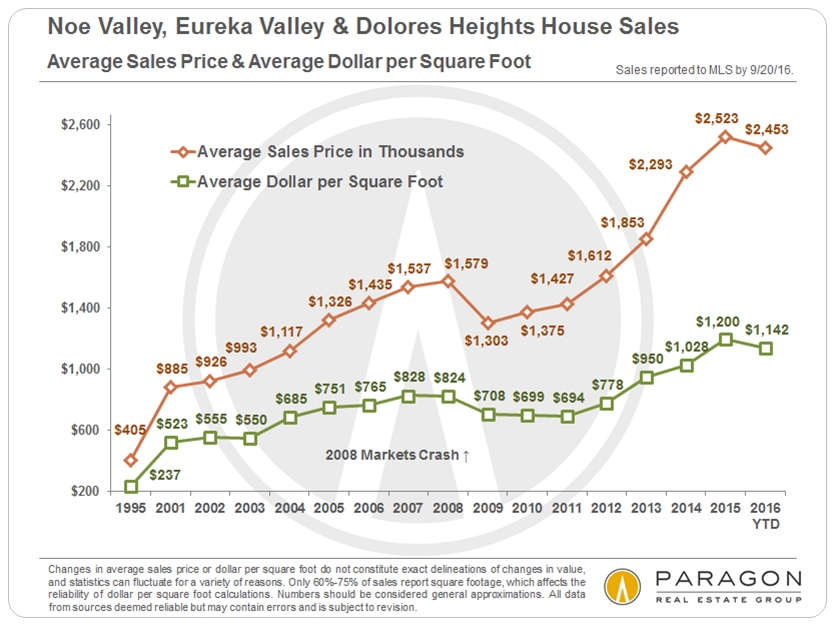 All data from sources deemed reliable, but may contain errors and is subject to revision. Statistics are generalities and how they apply to any specific property is unknown. Short-term fluctuations are less meaningful than longer term trends. All numbers should be considered approximate. 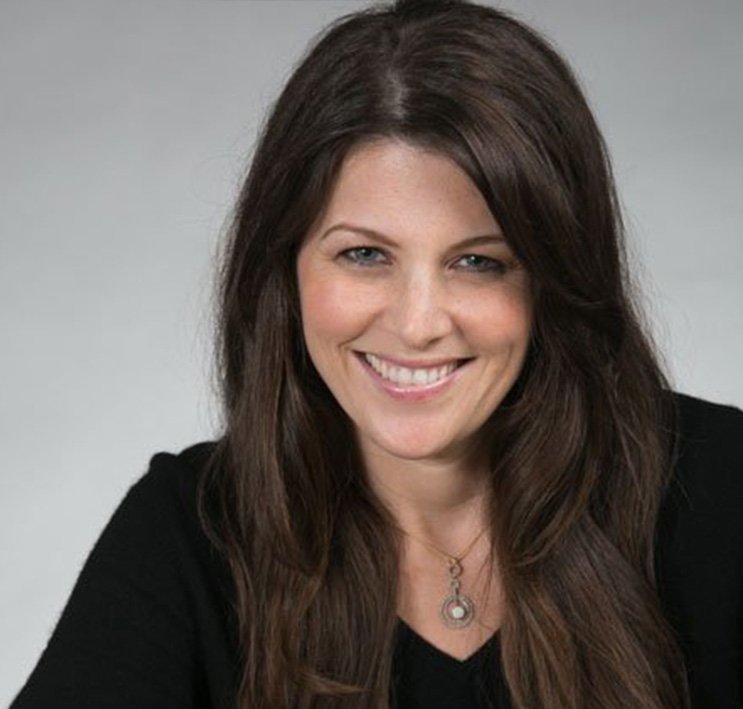 “I can’t say enough nice things about Julie! You expect a real estate agent to handle all the time-consuming and confusing paperwork (which she did). But what Julie brings is so much more: a thorough knowledge of the housing market and the people skills to make things happen. I`ve retained Julie to both buy and sell properties, and she always brings a calming efficiency to the process. Whenever I needed something, she was readily accessible via cell-phone or email and offered quality guidance. Recently, she helped me buy a new house and sell our old house in 2 months – wow! I will definitely be using Julie again in the future.”